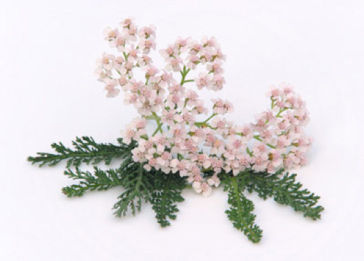 Did you know yarrow is native to Europe? Now commonly found growing wild in North America (except far north). Yarrow is a familiar plant in meadows and fields, along the sides of country lanes, roadsides, on embankments, and in landfills. Yarrow is a member of the daisy family. In many parts of Europe yarrow was believed to protect against all evil.

The yarrow plant was first used by the Greeks over 3,000 years ago for treating wounds on the skin. The flowers and leaves of yarrow were eaten and also made into a tea. The fresh leaves were used to stop bleeding wounds, treat gastrointestinal problems, fight fevers, lessen menstrual bleeding and better circulation. The fresh leaves were also chewed on to relieve tooth aches. Scientists have credited yarrow for its benefits relating to almost every organ in the body.

Yarrow gives strength and energy to the body and mind. It has been studied for its ability to help circulatory disorders like hemorrhoids and varicose veins. Colic, constipation problems, indigestion and cramps are also influenced by using essential oils. Hypertension, Insomnia and other stress related issues are also dealt with using yarrow oil. Many other people claim it is great for allergies, and asthma.