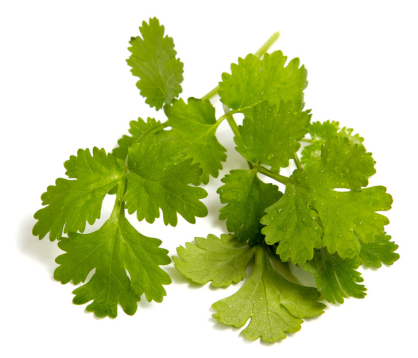 Did you know Cilantro essential oil is the oil of releasing control? Cilantro makes the detoxification of emotions and debris. It is helpful in lightening your load through the release of issues buried in the body, heart and soul. Those in need of cilantro may attempt to obsessively control other people or manage their surrounding and conditions.

It is a mystery as to where Cilantro originated, but it is thought by many to be from the Mediterranean region of Europe. No one knows exactly, but it appears that cilantro has been used for at least 5000 years. The seeds, also known as coriander, have even been found in ancient Egyptian tombs. Perhaps this was because the coriander seeds were thought by the ancient herbalists to be an aphrodisiac.

The therapeutic and culinary uses of Cilantro have been documented for centuries. Cilantro contains antioxidants known to protect the body’s cells from oxidative stress. Cilantro promotes healthy digestion and acts as a powerful cleanser and detoxifier for the body’s systems. Applied topically, Cilantro is very soothing and cooling to the skin, and it adds a fresh, herbal aroma to any essential oil blend when diffused.

There is also a large amount of literature speculating that cilantro may be an effective chellation therapy for people who have excess mercury in their systems. Some think that mercury poisoning could be the result of metallic teeth fillings. Every time a person with fillings chews, the fillings release minute amounts of mercury gas that may be breathed into the system. Of course, this is all speculative and disputed. Nevertheless, many people who have suffered from mercury poisoning and the “brain cloud” it causes have reported fairly rapid relief by the consistent consumption of cilantro over a period of just a few weeks.

Cilantro’s culinary uses are endless, adding a flavorful twist to meats, salads, dips, and guacamole. A small amount goes a long way, sometimes a drop is too much and overpowering. Just dipping a toothpick into an essential oil bottle, then using the toothpick for stirring is sufficient.