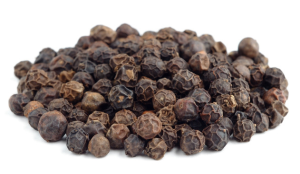 Did you know Black Pepper is the oil of unmasking? It reveals the masks and superficial facades people use to hide aspects of one’s self. Since childhood, most of us have been taught that some feelings and behaviors are acceptable while others are not. So instead of seeking to understand feelings and behaviors that appear to be inappropriate, they usually judge and condemn. People learn early in life in order to be loved, and excepted they must hide their negative behaviors behind a mask or facade. Black Pepper helps people find their authentic self.

Black Pepper also comes in green, red, and white all from the same plant. The color is related to how ripe it is and how it has been processed. Black Pepper is the number one selling spice in America. Pepper is native to India, and grows as a tall vine with the peppercorns as flowering drupes. It has been used in cooking for over 2000 years!

Pepper was mostly eaten by the wealthy in the past, as it was so expensive and sought after. Traders formed spice routes from India to Europe and would often fight over them. In the Middle Ages a man’s wealth was measured by his stock pile of pepper. The Romans would even demand pepper as a ransom when besieging a city.

Black Pepper gets its kick from the compound peperine. Black Pepper loses its flavor and aroma through evaporation, so its best to keep it in an airtight container. Consider using whole peppercorns and grinding just before use to maintain flavor, and add near the end of cooking.

Black Pepper essential oil is high in monoterpenes and sesquiterpenes, known for their antioxidant activity and ability to help ward off environmental and seasonal threats. Black Pepper promotes healthy circulation both internally and externally, but should be used with caution when applied topically due to its strong warming sensation. It may also help curb urges to smoke.

1 thought on “Black Pepper-Did You Know?”